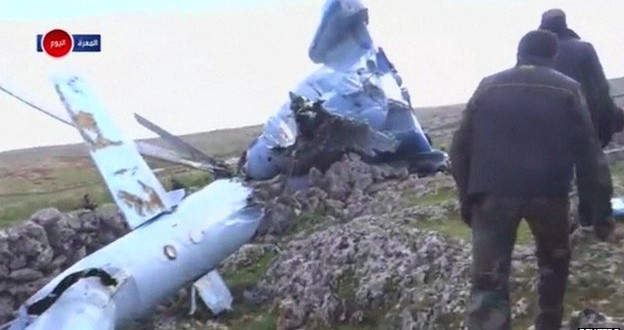 Pictures and video posted on social media, which could not be independently verified, appeared to show a damaged helicopter lying on its side

A Syrian government helicopter has crashed in a rebel-held area in the country’s north-west, activists say.

The helicopter went down in Jabal al-Zawiya in Idlib province, an area held by opposition fighters, including those from al-Nusra Front, the Syrian Observatory for Human Rights reported.

Four crew members were captured, while a fifth was killed, the group said.

Syria’s civil war, which began four years ago, has killed more than 200,000 Syrians and displaced 11 million.

The helicopter was forced to carry out an “emergency landing due to technical failure” near the northern town of Maarat al-Numan, the UK-based observatory said.

There were at least six crew members on board, and the fate of the sixth member is unknown, it added.

Syrian state television confirmed that an army helicopter made an emergency landing in north-west Syria, and said a search for the crew members was underway, Reuters reported.

Pictures and video posted online appeared to show a large blue helicopter, damaged and lying on its side, on a rocky field.

The Syrian government has been widely accused of dropping barrel bombs from helicopters on hundreds of sites, in violation of a UN Security Council resolution.

In an interview with the BBC in February, Syrian President Bashar al-Assad denied that his forces used barrel bombs.

Syrian rebels control parts of the north-west, including Idlib province