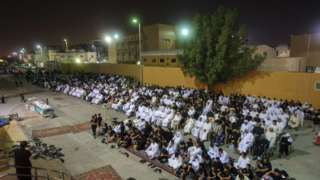 At least five people have been killed during an attack on a Shia gathering hall in eastern Saudi Arabia, media in the kingdom have reported.

The Al-Arabiya television channel said that one of the attackers was believed to be be linked to Islamic State (IS) militants and was killed.

Two others were reported to be under arrest. IS has claimed responsibility.

The shooting comes two days after the start of Ashura commemorations, when Shias mourn the death of Hussein.

He was a grandson of the Prophet Muhammad and is venerated by Saudi Arabia’s minority Shia community.

Friday’s attack took place in the city of Saihat, Al-Ekhbariya news channel reported. It said that four people were wounded.

A witness to the violence told the AFP news agency that “a gunman began randomly shooting at people attending a sermon”.

Other lower scale attacks against the Shia community in the east of Saudi Arabia were also reported on Friday evening.

The Shia community in the kingdom is increasingly being targeted. Most live in the oil-rich east, and many complain of discrimination.

In May, IS said it had carried out a deadly bomb attack outside a Shia mosque in the city of Damman.

A week before, more than 20 people were killed in the village of al-Qadeeh when an IS suicide bomber struck during Friday prayers at a Shia mosque.

That attack was the first to be claimed by the Saudi branch of IS, which was formally established last November.

Saudi Arabia, which is part of a US-led coalition against IS in Syria and Iraq, has previously been threatened by IS.

The Saudis are also leading a coalition of Arab states in an air campaign against Shia rebels in Yemen.