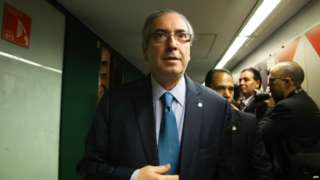 Brazilian prosecutors have accused the speaker of the lower house of Congress, Eduardo Cunha, of keeping millions of dollars in foreign bank accounts.

They said the money was obtained illegally and not declared.

He denies the charges and says he is being unfairly targeted by the Prosecutor’s Office.

Mr Cunha has been leading calls for the impeachment of President Dilma Rousseff, but he is now facing calls from other parties to step down.

As speaker of the Chamber of Deputies, he holds the power to allow impeachment proceedings against Ms Rousseff.

The main opposition parties made public a demand last week for Mr Cunha to resign.

A request for his resignation had already come from government supporters in Congress.

Mr Cunha is being investigated for alleged corruption in a kick-back scheme at the state run oil company, Petrobras.

Brazil’s Supreme Court ruled on Thursday that the Prosecutor’s Office was allowed to investigate allegations of corruption against Mr Cunha.

Prosecutors said on Friday that he hid millions of dollars in Swiss accounts opened in his wife’s and his children’s names.

“There is sufficient proof that the foreign bank accounts were not declared and that at least in relation to Eduardo Cunha the money was obtained illegally,” said a Prosecutor’s Office statement.

She was accused of borrowing money illegally from state banks to make up for budget shortfalls.

Government supporters say calls for an impeachment less than a year after Ms Rousseff was re-elected are tantamount to a coup attempt.