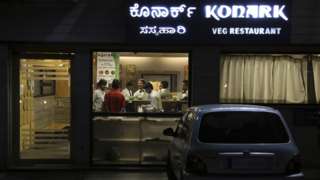 An Australian man who said locals from the Indian city of Bangalore harassed him over his tattoo of a Hindu goddess has now left the city, police said.

Matthew Gordon said locals threatened him and his girlfriend at a restaurant, and that he was forced to write a letter of apology at a police station.

However police told BBC Hindi they had not insisted on an apology letter.

It was “concerned” by the incident and was speaking to local authorities, it added.

Bangalore police said they are investigating the incident.

Speaking to local media about Saturday’s incident, Mr Gordon said they had been harassed by a group of people who appeared to be political activists.

“One of them came to me and confronted me about my tattoo. Soon they surrounded us and threatened to skin my leg and remove the tattoo,” he was quoted as saying.

Ramesh Yadav, identified as one of the people responsible for heckling Mr Gordon, is a known activist from India’s governing BJP party.

He denied threatening Mr Gordon and said he had only advised him to cover the tattoo because it could hurt local sentiments.

‘I should not have to apologise’

Mr Gordon’s Facebook posts on the incident have been widely shared in India.

In one post he shared a picture of his letter of apology that he alleged police had forced him to write before he could leave the station.

“I should not have to apologise for what is on my skin and be put in a traumatising situation where it is apparently acceptable to be harassed, threatened and mobbed,” he said.

However Bangalore Commissioner of Police NS Megharikh told BBC Hindi that they had never insisted on an apology letter and that Mr Gordon had written it on the advice of a “local friend”.

“There was some altercation near the restaurant. In any case, the police responded to a call from the spot and only brought them to the police station to resolve the issue,” he said.