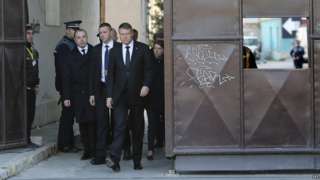 Romania’s president has said safety regulations seem to have been ignored in a Bucharest nightclub where a fire killed 27 people on Friday night.

Survivors say the fire started after a heavy metal band set off fireworks, causing the ceiling and a pillar to catch alight and producing heavy smoke.

A stampede for the exit followed. More than 140 people are being treated in hospital, some with severe burns.

“I am saddened, but also revolted that a tragedy of this scale could have taken place in Bucharest,” President Klaus Iohannis said.

“We already have indications that the legal regulations had not been respected,” he said.

“I hope that the authorities manage their inquiry with speed and rigour.”

The fire broke out at about 23:00 at the Colectiv club, which was hosting a free rock concert by the band Goodbye to Gravity. Up to 400 people are thought to have been inside.

Some people initially thought the fire was part of the show, survivors said.

Local journalist Sorin Bogdan told the BBC the club was in a converted former factory with two small exit doors, only one of which was possible to open initially.

A witness quoted by Romania’s state news agency said terrified concert-goers had to break the second door down to escape.

“People were fainting, they were fainting because of the smoke. It was total chaos, people were trampled,” witness Victor Ionescu told local television station Antena 3.

Some 200 people suffered injuries, including from burns and smoke inhalation. Officials have warned that the death toll may rise.

Hundreds of people who responded to appeals for blood donations queued outside hospitals and blood banks on Saturday.

It is not the first time pyrotechnics used in a nightclub have caused a deadly fire.

Are you in the area? Did you witness the accident? Email [email protected] with your story.

Please include a contact number if you are willing to speak to a BBC journalist. You can contact us in the following ways: