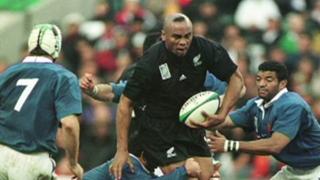 Lomu, who scored 43 tries in 73 matches for New Zealand between 1994 and 2002, had been diagnosed with a rare and serious kidney condition.

It forced him to quit the game and he had a kidney transplant in 2004, but the organ stopped functioning in 2011.

“Jonah was a legend of our game and loved by his many fans both here and around the world,” said New Zealand Rugby chief executive Steve Tew.

“We’re lost for words and our heartfelt sympathies go out to Jonah’s family.”

Family spokesman John Mayhew told New Zealand television that Lomu’s death was “totally unexpected” and that he had only arrived back from the UK on Tuesday, after spending time there for the Rugby World Cup.

New Zealand Prime Minister John Key said: “The thoughts of the entire country are with his family.”

In an interview with the Daily Mail in August, Lomu had said he was on dialysis and hoping for a second kidney transplant.

He is survived by his wife Nadene and two sons.

‘Blend of pace, power and size never before seen’

No-one transcended the sport of rugby union quite like Jonah Lomu. Bursting onto the scene of the 1995 World Cup, Lomu was a force of nature, the player of the tournament by some distance. His blend of pace, power and size never before seen.

Despite his health problems, he had been working in the UK during the recent Rugby World Cup, which makes his death all the more shocking.

Quite simply, Lomu was a giant of world rugby. The man who changed the game forever.

Lomu made his Test debut in 1994 against France in Christchurch.

As well as playing for several domestic teams in his homeland, he made 10 appearances for Cardiff Blues in Wales between 2005 and 2006, shortly before his retirement.

Despite never winning the World Cup, he is the joint top try-scorer in its history – alongside South Africa wing Bryan Habana – with 15 tries in 11 games during the 1995 and 1999 tournaments.

The winger captured global attention by scoring four tries against England in the 1995 semi-final, including a memorable solo effort where he ran over the top of full-back Mike Catt.

And former Wales fly-half Jonathan Davies said: “Can’t believe that Jonah Lomu has passed away. Was with him and his wife and family for an evening last month.

“So sad, life is so cruel. RIP Jonah you were a true legend and a gentleman. You changed the game of rugby and will be sorely missed. My thoughts are with your family.”