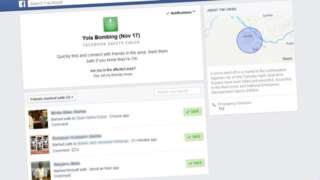 Facebook has activated its safety check feature after a suicide attack killed 32 people in the north-eastern Nigerian city of Yola.

Before the Paris attack, the feature was only used in natural disasters.

The safety check allows people to inform their contacts they are safe.

The BBC’s technology reporter Dave Lee says during emergencies mobile phone networks often collapse under the stress of everyone using their phones at the same time – so this is one way to help solve that by informing possibly hundreds of friends in one go.

The system was first used earlier this year during the Nepal earthquake.

This is the third attack this year in Yola.

The suicide bomber targeted a busy vegetable market late on Tuesday as stall holders were closing up.

Boko Haram militants started attacks in Nigeria in 2009 in an attempt to create an Islamic state.

“A loss of human life anywhere is a tragedy, and we’re committed to doing our part to help people in more of these situations,” Mr Zuckerberg added.

One Yola resident who used the feature, Maulud Usman, told the BBC he feels Mr Zuckerberg had taken on the previous criticism.

“I was one of those that criticised him when he activated the safety check in Paris despite the fact that Boko Haram has been bombing us in north eastern Nigeria for years, killing thousands of people, yet Facebook didn’t deem it fit to activate the safety check.”

“I’m happy he listened to our cries”.