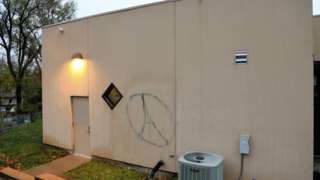 Mosques attacked in US and Canada

Mosques in the US and Canada have experienced an increase in vandalism and threats since the Paris attacks, say campaigners.

Islamic centres have been receiving hateful phone messages and some mosques have been marked with graffiti, fire and vengeful messages.

In Canada, a man is in police custody after releasing a video threatening to kill Muslims in Quebec.

Wearing a mask of face paint, he said he would kill “one Arab per week”.

The increase in anti-Muslim sentiment has emerged after 129 people were killed and more than 350 wounded in gun and bomb attacks linked to Islamic State militants.

“The picture is getting increasingly bleak,” said Ibrahim Hooper of the US-based Council on American-Islamic relations (CAIR).

Canadian Prime Minister Justin Trudeau said he was “deeply disturbed” after a fire was deliberately set at the Kawartha Muslim Religious Association’s mosque in Peterborough, Ontario.

Canada will “make every effort to apprehend any perpetrator”, he said.

“We have men, women and children who come to the masjid to pray every day, and since these Paris attacks, they have reduced the frequency of their visits to the masjid with fear for their lives,” said Nasir Husain, general secretary of the Omaha Islamic Center in Nebraska.

The backlash is accompanied by US governors and lawmakers asking to halt the processing of Syrian refugees into the US.

“We urge public officials and presidential candidates not to scapegoat American Muslims and not allow Islam to be demonised by Islamophobes or by the anti-Islamic actions or terrorists,” said Nihad Awad of CAIR.