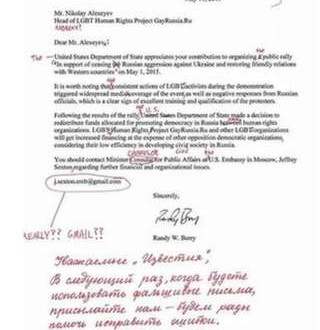 The US state department has poked fun at a Russian newspaper which it says faked a letter by a US official.

It said the letter emerged after hackers gained access to Mr Alexeyev’s emails.

The US embassy corrected the letter’s grammar and spelling before posting a photo to its Facebook page.

The reaction was prompted by an article about the Russian lesbian, gay, bisexual, transgender and intersex (LGBTI) community claiming that US authorities were paying Mr Alexeyev to destabilise the situation in Russia, with the letter as proof.

The author of the article quotes the letter allegedly signed by Mr Berry, US special envoy for the human rights of LGBTI persons.

Mr Berry apparently thanks Mr Alexeyev for organising a public rally “in support of ceasing Russian aggression against Ukraine” on 1 May 2015.

But US diplomats expressed astonishment at the suggestion that Mr Alexeyev would contact a US official using his Gmail address.

They have offered to correct any further “fake letters” before publication, saying: “Dear Izvestia. Next time you are going to use fake letters, send them to us – we will be happy to help correct your mistakes. Yours sincerely, State Department.”