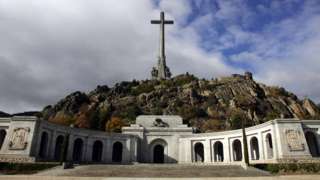 A prominent Spanish lawyer has launched a petition calling for the removal of the remains of former dictator General Franco from their official resting place.

Baltasar Garzon said the Valley of the Fallen should instead be converted into a victims’ memorial.

The move comes on the eve of the 40th anniversary of Franco’s death.

Spain made the successful transition to democracy afterwards, but Franco’s legacy remains painful, with families still searching for the remains of loved ones.

Political parties at the time agreed to amnesty for crimes committed during and after the civil war, meaning that no trials have been held.

In the petition, Mr Garzon calls for the removal of Franco-era symbols from the site and says there should be an official apology.

“We have a serious problem with coming to terms with what was done and find solutions. It’s very Spanish to wait for the storm to pass,” said Mr Garzon.

The Valley of the Fallen was built largely by prisoners of war. More than 30,000 dead from both sides in the civil war were moved there on Franco’s orders in a bid to promote reconciliation.

Instead, it became widely seen as a divisive reminder of the years of dictatorship.

There have been previous appeals for the removal of Franco’s remains but they have been resisted by the governing Popular Party.

Mr Garzon is best known for helping to secure the arrest of the former Chilean leader Augusto Pinochet in London in 1998.