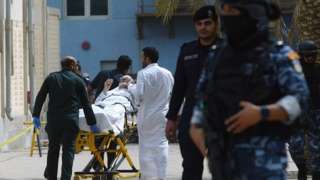 Kuwait arrests group over IS links

Kuwait has arrested members of an alleged cell accused of supplying funds and weapons to the so-called Islamic State (IS), reports say.

Five others had been arrested, the report said.

In June, 27 people died after an attack on one of Kuwait’s oldest Shia mosques.

It was the deadliest bombing in decades in the predominantly Sunni Muslim country. An affiliate group of IS calling itself Najd Province said it carried out the attack.

IS has also said it was behind last week’s attacks in Paris and Beirut.

Kuwait’s interior ministry said the cell had been helping to recruit fighters and raised money that was being funnelled to an IS-related bank account in Turkey.

It said four members of the cell were outside Kuwait, including two Syrians and two Australian-Lebanese. It was unclear whether those four had been arrested.