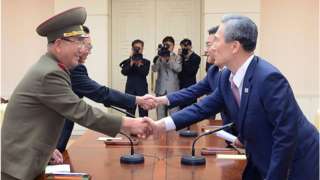 South Korea has confirmed it has accepted an offer from North Korea to hold talks next week.

The talks, to be held at the Panmunjom truce village, will set the stage for high-level meetings which were agreed in principle in August.

That deal followed a stand-off in August that began with landmine explosions on the border and involved an exchange of artillery fire.

Seoul said it had sent requests for meetings before but had no response.

The BBC’s Stephen Evans in Seoul says it is unlikely that any major decision will emerge at the talks scheduled for 26 November, but that the agreement indicates a desire on both sides to reduce tensions.

North and South Korea are technically still at war because the 1950-53 Korean War ended in an armistice, not a peace treaty.

In response, South Korea resumed its abandoned practise of blasting propaganda over the border, and evacuated people from the border region. North Korea said it had put its military on a “war footing”.

Tensions bubbled over in a brief exchange of fire at the heavily guarded border.

After crisis talks, South Korea agreed to turned off the loudspeakers while the North agreed to step down its military.

The agreement included a pledge to resume talks on improving ties, and to hold the first reunions for families separated during the Korean war in over a year.

The North also expressed regret over the mine explosions, though later clarified it was not accepting responsibility for the blast.