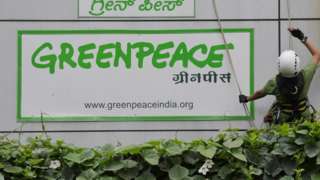 An Indian court has put on hold an order cancelling Greenpeace India’s registration to operate in the country.

The court ruled the group could continue operating until there is clarity on accusations of financial irregularities levelled by the government, the environmentalists said.

India has previously accused the group of having an anti-development agenda.

Greenpeace lawyer Vineet Subramani told the AFP news agency that the judge had observed “prima facie, the government has not followed the principles of natural justice”.

The move was the latest in a series of actions aimed at Greenpeace and a number of other organisations whom the authorities have accused of working against the country’s interests.

In April the government suspended Greenpeace’s registration and froze its domestic bank accounts for alleged violations. The group successfully challenged the order in court.

But later Tamil Nadu, where Greenpeace was registered, cancelled the permit.

Indian Prime Minister Narendra Modi’s government has cancelled the foreign funding licences of around 9,000 charities since a major crackdown began in April, according to AFP.

Greenpeace has been working in India for 14 years and employs more than 300 people.