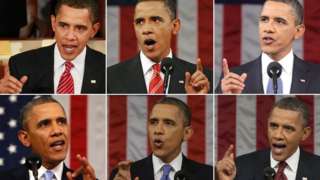 US President Obama has jokingly admitted that he does not dye his hair, unlike other world leaders.

The 54-year-old president was responding to a Cambodian student who asked him for wise advice.

Mr Obama entered office in 2009 with dark black hair, however in recent years it has turned markedly more grey.

The colour of a president’s hair has been controversial at times, with some leaders keeping secret the fact that they dyed their hair.

“The first thing I want from young people is to stop calling me old,” the president told the student.

“I don’t dye my hair and a lot of world leaders do,” he said. “I won’t say who. But their barbers know, their hairdressers”.

President Ronald Reagan, for instance, never admitted to dying his jet-black hair, and his barber never spilled the beans, either.

Gerhard Schroeder, the former German chancellor, once sued a news agency for claiming that he hued his hair.