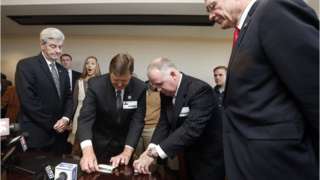 US election settled by 'drawing straws'

A Democrat has won a Mississippi House race by drawing a longer straw, an official way to break a tie in a legislative election for the state.

Mr Eaton’s fateful grasp of the longer one gave him the victory, keeping Republicans from having a supermajority in the state house.

Mr Tullos, not admitting defeat, filed an appeal on Friday.

Mr Eaton, a farmer, was excited about his win.

“There’s always happiness in a good crop year,” he said after winning.

Mr Tullos apparently left the room quickly and did not show emotion.

Mr Eaton, a 20-year incumbent, had said he did not approve of the straw-drawing, but he would accept the results.

“Look, my life’s a gamble,” he said, according to the New York Times. “I’m a farmer. I depend on the weather and the rain. The statute’s clear, but my life is not.”

Each candidate had received 4,589 votes in the legislative election for the House seat.

According to the National Conference of State Legislatures, 24 states legally decide the outcome of tied legislative elections by drawing straws or flipping coins.

Similar cases have happened in New Mexico and Alaska, using a coin toss.

Connecticut decided in 2007 to eliminate chance games for breaking ties, a year after a coin toss determined a state house election.