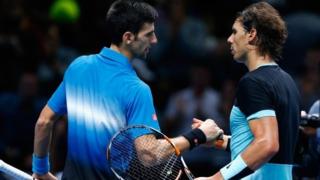 Novak Djokovic saw off Rafael Nadal with clinical precision to reach the final and stay on track for a fourth straight ATP World Tour Finals title.

Serbia’s world number one eased to a 6-3 6-3 victory, which brings him level at 23-23 in career meetings with the Spaniard.

Djokovic, 28, has now won eight of his last nine matches against Nadal.

Nadal had been the story of the group stage as he racked up three impressive wins and talked about getting back to his best form, while Djokovic had played below his own very lofty standards.

The Serb set that right within five minutes on Saturday with a breathtaking return game, four clean winners helping him break Nadal’s serve to love.

It was all Djokovic required to take the first set as Nadal failed to make any impression against the top seed’s punishing accuracy.

Nadal, with 14 Grand Slam titles to Djokovic’s 10, saved a break point at the start of the second set, but succumbed in a brutal 25-stroke rally in game five.

Djokovic had lost just 10 points on serve and finished in spectacular style with another break, two superb lobs, a deft drop volley and two searing backhand winners closing it out.