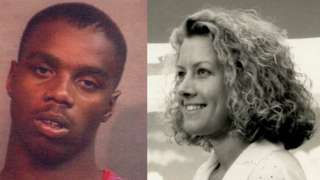 Bail for wrongly-jailed US man

A US man whose conviction was overturned after serving more than 23 years in jail for crimes including the killing of a UK tourist has been freed.

Mr Jones was sentenced to life for rape, robbery and the manslaughter of Julie Stott in 1992.

He was jailed even though another man, Lester Jones, had already been convicted of the murder.

There had also been compelling evidence that linked him to all of the crimes Robert Jones was accused of having committed.

State prosecutors had withheld crucial evidence in Robert Jones’s trial. In June, a Louisiana court ruled that he did not get a fair trial, but he remained in prison.

Last month, the murder detective and the judge from Mr Jones’s original trial told BBC News they believed his conviction had been a miscarriage of justice.

This week a judge said he could leave prison on bail pending a retrial, citing “disturbing testimony from a lead detective”.

Speaking outside the prison, Mr Jones’s mother described his release as a “blessed day”.

His daughter Bree, who was born after he was jailed, said: “I’ve been looking forward to it for a long time.”