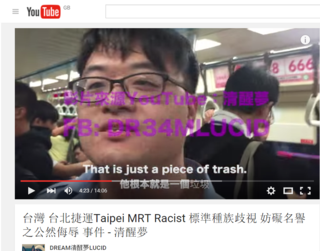 Many people in Taiwan thought racism and prejudice didn’t exist in their society – until a viral video of a British man and his Taiwanese girlfriend being verbally abused on the subway last week touched off a soul-searching debate that’s continued to trend.

Last month, Christopher Raymond Hall and his girlfriend were taking the subway in Taipei when, Hall says, his girlfriend noticed a Taiwanese man staring and mouthing words at her. They moved to the next carriage, but the man followed and began insulting them.

The man, later identified as a Mr Liao, told the couple: “Just look at his ugly face. Just look at you, this kind of whore, with this piece of trash foreigner… The whole of Taiwan despises you.”

Liao continued to insult Hall for several minutes, calling him a “loser” who came to Taiwan because he couldn’t find a girlfriend back home. Hall tried to ask a series of questions and find out the man’s name, without much luck, and when the train stopped, he and his girlfriend got off.

But the girlfriend had filmed the whole conversation. And since Hall, 34, posted the video to YouTube on 11 November, it’s been reported on around the world and watched more than 2 million times. Within Taiwan, the debate has brought out deeply held views that aren’t often aired.

Hear more on this story – and more from the Trending team – on BBC World Service radio. Or download our podcast.

Many Taiwanese people commented, expressing shame over what Liao did – and defending Taiwan’s reputation. “He doesn’t represent all Taiwanese people. … Taiwan is a very wonderful place,” one woman wrote.

However, others urged people to pause and give the incident some thought. “When mistakes are made… we should review and introspect,” one said. “Everyone knows Taiwan indeed has serious racial discrimination.”

Others pointed out they themselves had suffered similar abuse or worse in Western countries.

The incident occurred against a backdrop of a vigorous debate about perceptions of Westerners and other foreigners on Taiwanese social media.

Earlier this year a song called Foreigner was a huge hit in the country, and the accompanying video was watched more than seven million times online. It shows a Taiwanese male band dressed as stereotypical foreigners, behaving badly in Taiwan. One acting like an “American” sings about how all women love him and how he’s slept with women of all races. In the final segment of the video, the singer blackens his face and wears an afro wig.

American student Avalon Owens posted a video response to Foreigner. Speaking in fluent Mandarin, she said: “Foreigners deserve respect, like anyone else.… The singer uses a ‘foreign’ accent the whole time, while playing out a bunch of foreign stereotypes. That is, the idea that white guys all come here to pick up on local girls, only want sex, have no other thoughts or ambitions, like they’re just stupid, shameless animals.” Her video has been viewed nearly 300,000 times.

She later told BBC Trending: “I’ve lived here so long and have all these close friendships, but it’s never going to feel like home because strangers view you as foreign. No matter how hard I work, I would never belong to this exclusive society.”

Many of those commenting on Hall’s video seemed to be Taiwanese people who have lived in or travelled to Western countries, and they pointed out that people in the West frequently stereotype and discriminate against minorities. They also expressed resentment towards the perceived privileges Western men have in Taiwan, including their relationships with local women.

One person commented on the video: “Is anyone not outraged by the white privilege in this case?… As a white man in Taiwan, you definitely have more power. People treat you nicer, and women flock to you. I cannot believe Taiwan actually expects the guy (Mr Liao) to apologize and even arrest him. This is ridiculous.”

Fuelling such resentment is a recent case of a Turkish-Canadian man who police said had many sex tapes of Taiwanese women he had slept with. The news shocked many and was widely reported.

But despite the negative comments about foreigners on social media, such views are rarely aired publicly in Taiwan, an island that prides itself on having some of the friendliest people in the world. Violent attacks against foreigners are practically unheard of, which perhaps explains why Hall’s video drew so much attention.

Avalon Owens told BBC Trending that she nevertheless feels that Taiwanese people are uncomfortable around foreigners, for example, rarely addressing them in Chinese even when they speak fluent Mandarin. “When I talk to someone out of the blue, they always seem so afraid,” she says. “When I walk around in my daily life, it makes people uncomfortable and that makes me uncomfortable.”

One reason behind these attitudes is that Taiwan is largely homogeneous and it’s still unsure of how to assimilate foreigners into its society – 95% are Han Chinese, 2.5% indigenous people, and around 2.5% immigrants, with most of these being Southeast Asian migrant workers. Only a small number are Western expatriates, according to government statistics. But many Westerners now arrive speaking Mandarin or devote themselves to learning the language after arriving.

Another reason for the negative attitudes is that Taiwanese used to feel inferior to the West when it was a developing economy, but they’ve become less mystified by Westerners and more willing to express what they don’t like about them.

But many Westerners nowadays come here because they are interested in Taiwanese or Chinese culture.

Hall is part of this trend. “When I was in university, I had lots of friends who were Taiwanese and mainland Chinese, and they taught me to speak Chinese,” he told BBC Trending.

“That’s why I came to Taiwan, it’s because of them.”

He has lived in Taiwan for a decade and has been in a serious relationship with his girlfriend for three years. His YouTube channel celebrates Taiwan and its people.

Join the conversation on this and other stories here.

His girlfriend, who did not want to be identified to protect her safety and privacy, says she feels it’s “very unfair” that Taiwanese think women who date Western men are after money or prestige, a stereotype that doesn’t apply to Taiwanese men who date Western women. “We don’t go out together much,” she says of her and Hall. “We feel the pressure.”

Last year, according to government statistics, 3,200 people from outside China and south-east Asia married Taiwanese locals, a number that is growing, albeit slowly.

Hall says he had initially not wanted to put the video on YouTube because he knew it would spark a controversy. But he uploaded it after he says the police acted too slowly to gather evidence.

“I would like racism to be taken seriously here, not just white people, but against south-east Asians and aboriginals. It exists in other countries, not just in the West. I hope wherever they are when people experience racism, I hope they can go to the police and the police will take it seriously.”

Taipei police authorities told BBC Trending that they have disciplined the officers involved and worked out standard operating procedures to handle future incidents. Taiwan’s foreign ministry said the incident is “rare and isolated” and Taiwanese people “are best known for their friendliness, hospitality and willingness to help foreigners and make them feel at home. The unfortunate actions of one individual do not change this fact.”

Liao, the man abusing Hall in the video, has declined interviews with media. A security guard for a Danish-owned company, he has been fired by his employer. Prosecutors will soon decide whether to file charges against him of publicly insulting someone, as there is no anti-racial discrimination law in Taiwan.

Next story: Not the Mali siege: Old images being shared on social media

As news about a siege at a hotel in Mali spreads, images related to the incident are being circulated on social media. In many cases the images are genuine – but in some they are not. READ MORE