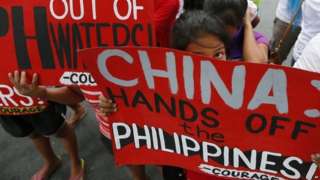 China has defended its construction of infrastructure on disputed islands in the South China Sea.

It said it did not intend to militarise the area and accused the US of provocations by sending a navy ship through the area last month.

The comments by a Chinese vice foreign minister came on the sidelines of the annual Asean summit in Kuala Lumpur.

China claims most of the South China Sea as its territory, but four South-East Asian states also claim parts.

On Wednesday, US President Barack Obama called on China to stop land reclamation in the disputed waters.

China has repeatedly said its dredging work is legal.

The land reclamation, which began in late 2013, has turned submerged reefs into islands.

“Building and maintaining necessary military facilities, this is what is required for China’s national defence and for the protection of those islands and reefs,” said Chinese Vice Foreign Minister Liu Zhenmin.

This year has seen increasingly vocal opposition by Vietnam and the Philippines, backed now by Japan and the US, to China’s construction of buildings, jetties and airstrips on the islands, the BBC’s Jonathan Head in Kuala Lumpur says.

“The world is watching,” to see if Beijing will behave like a “responsible global leader”, Philippines President Benigno Aquino told leaders at the summit hours earlier.

In response, China’s Prime Minister, Li Keqiang, warned countries outside the region not to inflame tension.

He also called for direct negotiations to resolve the dispute.

But Vietnam and the Philippines want the issue to be dealt with at a regional or international level, says our correspondent.

Why is the South China Sea contentious?