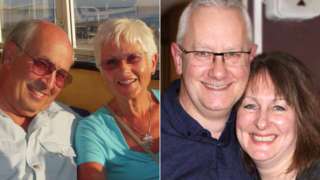 Attempts to recover the remaining bodies of those who died in a helicopter crash in New Zealand, which killed four Britons, have been postponed until at least Wednesday.

Bad weather at the Fox Glacier has hampered attempts to reach the site.

The bodies of four of the seven victims have been recovered so far.

The Britons are Andrew Virco, 50, and Katharine Walker, 51, from Cambridge, and Nigel and Helen Charlton, aged 66 and 70, from Hampshire.

The aircraft crashed in a crevasse on the glacier, on New Zealand’s South Island, on Saturday morning.

The crash site is on the island’s remote west coast, which is a popular tourist area.

Also among the dead are Sovannmony Leang, 27, and Josephine Gibson, 29, both from New South Wales, Australia, and pilot Mitchell Gameren, 28, from Queenstown, New Zealand.

The bodies which have been recovered have been taken to a temporary mortuary facility nearby for formal identification, which New Zealand Police say might take several days.

The cause of the crash is being investigated.

“She affected so many people in so many good ways,” she told the BBC.

She added that the couple’s “big adventure” to New Zealand was to celebrate turning 50.

Colleagues of Ms Walker, who was head of radiotherapy at Addenbrooke’s Hospital in Cambridge, are said to be “devastated” by her death.

The family of grandparents Mr and Mrs Charlton, who lived in the village of Dunbridge, near Romsey, said they were “deeply saddened”.

“They were very adventurous when it came to travel and this holiday was to be their last big adventure together,” their statement said.

Operation commander inspector John Canning said they were “determined to return these people to their families” but said they faced a “complex and technical task”.

“The site is near the top of the glacier, it’s all ice, it’s not level and there are blocks of ice as big as buildings with crevasses between them,” he said.

The helicopter involved is believed to be a Eurocopter “Squirrel” operated by local firm Alpine Adventures, which also trades as Fox Glacier Heliservices.

In a statement the firm said: “Fox Heliservices’ thoughts are with the families of the passengers and pilot.

“The pilot was a very valued member of our team. The New Zealand Police and Civil Aviation Authority have taken over the investigation.”

A UK Foreign Office spokesman said it was providing consular assistance to the families of those killed.