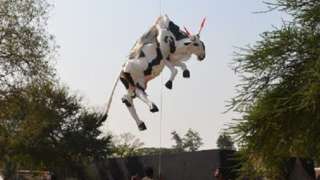 Police in India’s Rajasthan state have apologised to artists for raiding an exhibition featuring a polystyrene cow dangling from a helium balloon.

Officers arrived at the Jaipur Art Summit on Saturday following complaints that the life-size cow floating in the air was offensive to Hindus.

They detained two artists for a few hours, while Hindu activists brought the installation down.

Activists say the raid is a sign of growing religious intolerance in India.

Rajasthan Chief Minister Vasundhara Raje tweeted on Sunday that she was “saddened” by the incident, and the police commissioner of Jaipur also apologised.

She said the chief of the local police station was “removed and I have spoken to the artist personally”.

Artist Siddhartha Kararwal had called his life-size cow effigy Bovine Divine, and had created it to highlight the plight of Indian cows that scavenge and choke on plastic bags.

But some people complained the cow looked as if it had been hanged, and that the model insulted the animal, which Hindus revere as a symbol of life and sustenance.

Some Hindu activists brought the installation down, but garlanded and blessed the cow before it was seized by police.

The police briefly detained two other artists, Chintan Upadhyay and Anish Ahluwalia, who protested against the move, leading to social media outrage.

The director of the art summit Pratap Sharma told The Indian Express newspaper that they don’t plan to reinstall the work.

“We don’t want to hurt anyone’s sensibilities again, so we are not going to install the work again,” he said.