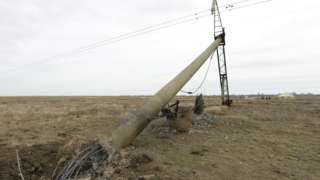 Ukraine has suspended deliveries of goods to Crimea, where a power blackout has caused major disruption.

Only essential services and government offices are operating in Crimea after key electricity pylons connected to the peninsula were knocked down in Ukraine.

Protesters – including Crimean Tatars – are preventing repairs to the pylons.

The Ukrainian government says new rules for cargo traffic need to be worked out for the peninsula, which was annexed by Russian forces in March 2014.

There has been disruption to road and rail traffic to and from Crimea since Ukrainian nationalists and Crimean Tatars began a border blockade in September.

A Tatar leader, Mustafa Dzhemilev, said the protesters would only let engineers repair two pylons that serve areas of mainland Ukraine – not the two linked to the southern peninsula, which is controlled by a pro-Moscow government.

Russia does not have a land border with Crimea, which gets about 70% of its electricity from Ukraine.

Most of Crimea’s two million people have been hit by the power cut. There are also some water shortages.

Public transport is still running and Crimean hospitals are using generators. But the blackout has shut down many businesses and plunged the streets into darkness.

A state of emergency was imposed in Crimea on Sunday after the four pylons were damaged. Monday was declared a non-working day.

The blackout cut cable and mobile internet and forced the closure of some 150 schools.

It is still not clear exactly how the pylons were damaged in Kherson, a Ukrainian region adjacent to Crimea. That region has been tense since Russia’s annexation of Crimea – an act that was condemned internationally.

Crimean Tatar activists suggested that the weakened pylons were blown down by the wind.

But Ukraine’s state energy company, Ukrenergo, said the damage was caused by “shelling or the use of explosive devices”.

He also warned that Ukraine would respond in kind if Russia introduced an embargo on Ukrainian products, as Moscow has threatened to do.

Russia is angry at Ukraine’s decision to implement a free trade agreement with the EU in January 2016. Russia says the deal will undermine its producers, because EU exporters are likely to use Ukraine as a back door into the Russian market.

Russia has blamed Ukrainian nationalists from far-right party Right Sector and Crimean Tatar activists for the pylon damage, calling it “an act of terrorism”.

A Crimean Tatar activist told Ukraine’s TV news broadcaster 112 Ukrayina that Russia must release “political prisoners” and let their leader return to Crimea in exchange for repairs to the power lines.

Crimean Tatar activists accuse Russia of abusing Tatar rights and denying them a voice since a pro-Moscow government was installed in Crimea.

Images on social media show Ukrainian flags on some damaged pylons – and Crimean Tatar flags on others.

Crimean authorities said they had managed to partially reconnect the cities of Simferopol, Yalta and Sevastopol using generators.

Emergency power-saving measures have been imposed. Sevastopol is getting three hours’ supply, followed by a six-hour cut; in Simferopol residents have three-hour power cuts three times a day.

Russia has started laying undersea cables to connect Crimea to its power grid. But the first phase will only take effect next month and the switch to Russia as the main supplier will take several years to complete.