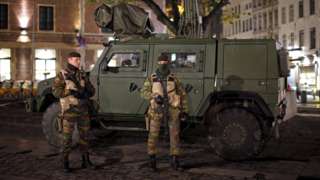 The US has issued a worldwide travel alert for its citizens in response to “increased terrorist threats”.

France, Russia, Mali and several other countries have seen deadly attacks in the past month.

A US state department representative told BBC News there was “currently… no reason to believe that US citizens would be specifically targeted”.

Meanwhile Belgium announced the capital Brussels would stay at the highest level of alert for another week over fears of militant attacks like those that killed 130 people in Paris on 13 November.

The travel alert advises US citizens to “exercise vigilance when in public places or using transportation”.

They are also advised to “be aware of immediate surroundings and avoid large crowds or crowded places”.

“Authorities believe the likelihood of terror attacks will continue as members of ISIL/Da’esh [IS] return from Syria and Iraq,” the state department said.

A US worldwide travel alert is unusual but not rare.

Similar advice, which applies everywhere bar the US itself, was issued twice in 2011 – following the death of Osama Bin Laden and on the tenth anniversary of the 11 September attacks. There was a further warning in August 2013.

The most recent worldwide alert came last Christmas in response to an attack in Sydney, Australia, flagging the risk of “lone wolf” attacks, a warning repeated this time using the less colourful phrase “unaffiliated persons”.

Such broad warnings have been criticised in the past, both for being so vague as to be of little practical use and for doing the terrorists’ job for them by creating a climate of fear in which governments may introduce repressive policies.

But with millions of Americans travelling this week to celebrate Thursday’s Thanksgiving holiday, US officials insist the action is a sensible reminder of the global terrorist threat.

Belgian Prime Minister Charles Michel warned that the threat to his country remained “imminent and serious”.

But he also said authorities were planning to reopen schools and the Brussels metro on Wednesday.

IS is believed to be behind the 13 November Paris attacks.

Co-ordinated assaults using guns and suicide vests were launched on several locations in the French capital.

Belgian prosecutors announced on Monday that a fourth suspect had been charged with terrorism offences related to the Paris attacks.

The unnamed man was one of 21 people detained in raids on Sunday and Monday. Seventeen have been released without charge.

Interview transcript: ‘My brothers were manipulated, not radicalised’

Paris attacks: Who were the victims?

Who were the Paris attackers?