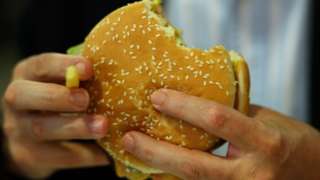 Western Australia police have arrested a naked man accused of rifling through a car and stealing a hamburger.

Police say a man from the remote town of Derby forced his way into a tradesman’s car and took the Hungry Jack’s Whopper burger.

When confronted by the tradesman, the alleged offender reportedly stripped off his clothes and walked away.

It is unclear why the man removed his clothes.

Officers reportedly detained the man a short time later and charged him with disorderly behaviour and stealing.