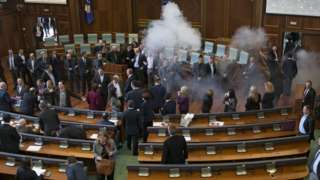 Police in Kosovo have tried to arrest opposition MP Albin Kurti, who has led a series of protests in parliament against agreements made with Serbia.

Mr Kurti was not at home when masked police entered his flat in Pristina on Wednesday, reports said.

He was hurt when he pepper-sprayed fellow MPs in parliament the previous day, KosovaPress said.

A grenade went off outside the constitutional court in Pristina as the raid took place.

But there was no confirmation that the explosion, described by police as “controlled”, was connected.

For weeks, Mr Kurti, a former leader of the Self-Determination party, has spearheaded opposition to a deal with Serbia, mediated by the EU in August, that hands greater autonomy to Kosovo’s ethnic Serb minority.

The opposition also objects to a border demarcation deal with Montenegro that it says hands Kosovo territory to its neighbour.

Kosovo, which has an ethnic Albanian majority, declared independence from Serbia in 2008 but has never been recognised by the Belgrade government.

The split came a decade after a conflict between Serb forces and Kosovan Albanian rebels. A Nato bombing campaign against Belgrade in effect forced Serbia to cede the state.

The constitutional court in Pristina last week suspended for two months the government’s deal providing greater power to Serb-run municipalities pending a review. But the opposition sees the court as too close to the government.

Seven people, most of them police, were hurt during protests outside the Kosovo parliament on Tuesday. Petrol bombs and stones were thrown outside the building as pepper spray and tear gas were sprayed inside the chamber.

The violence broke out as King Abdullah of Jordan was on a visit to Kosovo.