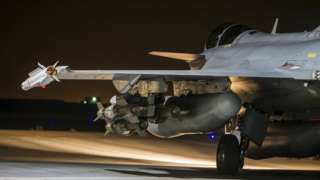 Air strikes by France and other nations on the Islamic State (IS) stronghold of Raqqa in Syria since Sunday have killed at least 33 militants, activists say.

The UK-based Syrian Observatory for Human Rights said most died when checkpoints around the city were hit.

It also reported the families of IS leaders had started leaving Raqqa for another of the jihadist group’s strongholds, the Iraqi city of Mosul.

An IS-linked news agency has reported no casualties from the air strikes.

The Amaq agency said on Monday and Tuesday that French warplanes had only targeted “empty locations”.

The Syrian Observatory, which has a network of informants on the ground, said more than 33 militants were believed to have been killed in the strikes, but their bodies were so severely dismembered that it could not give an exact figure.

The IS installations struck – including ammunition dumps and command centres – had been stripped of personnel apart from guards on the gates, it added.

Some of the air and missile strikes may have been carried out by the Russians as well as the French, who began their bombing campaign on Sunday night, two days after IS claimed responsibility for the killing of 129 people in Paris, reports the BBC’s Jim Muir in northern Iraq.

The Syrian Observatory also said that IS members and dozens of the families of senior members had begun leaving Raqqa for Mosul because of security concerns.

However, our correspondent says the journey has been made more difficult by the capture by Kurdish forces last week of the town of Sinjar in north-western Iraq, cutting off the last main direct route.

Former residents of Raqqa told the Associated Press that IS had also been strengthening its defences in the city in anticipation of a ground assault by US-backed Kurdish militia and Syrian rebel fighters advancing from the north and east.

A Turkey-based activist called Khaled said civilians had also been banned from leaving the city, leading to fears that IS intended to use them as human shields.

US Secretary of State John Kerry said on Tuesday that he was convinced that in the course of the next few weeks IS would “feel even greater pressure”, with the international community stepping up efforts to “hit them at the core”.

But on Wednesday, Russian Foreign Minister Sergei Lavrov warned Western countries that if they wanted to mobilise a “genuinely global coalition” against IS they would have to drop their demand that Syrian President Bashar al-Assad step down.

As Russia intensifies its air campaign in Syria it is similarly stepping up its diplomatic offensive.

In the wake of the downing of its airliner, Russia has belatedly joined the anti-IS struggle. The French, who have similarly suffered IS attacks, seem to have shifted their ground too and are now pushing for greater co-operation with Moscow.

On Wednesday, Russian Foreign Minister Sergei Lavrov warned Western countries that if they wanted to mobilise a “genuinely global coalition” against IS they would have to drop their demand that Syrian President Bashar al-Assad step down.

Sergei Lavrov clearly wants to turn this coincidence of interests into a more formal coalition. Moscow has always insisted that the US-led coalition’s demand that President Assad stand down before there can be any practical progress towards peace in Syria is wrong-headed.

Whatever Russia’s view about the Syrian President’s long-term future such “pre-conditions” are seen as prohibiting progress.

But while Western nations weigh up the priority that should be given to an all-out campaign against IS, it is hard to see how the removal of such “pre-conditions” will encourage Syrian opposition groups to the negotiating table.

After meeting his Lebanese counterpart in Moscow, Mr Lavrov told a news conference that he had detected “a change in position of our Western colleagues” since the Paris attacks and the bombing of a Russian passenger plane flying over Egypt, also claimed by IS.

“In my opinion, there can now be no doubts that it is simply unacceptable to put forward any preconditions in order to unite in the battle against so-called Islamic State terrorists,” he added.

Western powers backing Syria’s opposition have previously insisted that Mr Assad stand aside as part of any political solution to the conflict in Syria.