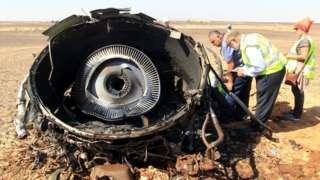 Islamic State’s magazine has published a photo of what it claims was the improvised bomb that brought down the Russian airliner in Egypt last month.

The picture in Dabiq shows a Schweppes Gold soda can and what appears to be a detonator and a switch.

No explanation is offered and security experts told the BBC it was not clear how the device would have worked.

Russia has confirmed it was a bomb that brought down the airliner.

On Tuesday, Russia’s security chief Alexander Bortnikov told President Vladimir Putin the bomb equivalent to up to 1kg of TNT had been planted on board the Metrojet Airbus 321 that crashed in the Sinai peninsula on 31 October.

Mr Bortnikov also said “traces of foreign explosives” were found on debris from the plane.

President Putin vowed to “find and punish” those behind the attack.

Nearly all the victims on the flight from the Red Sea resort of Sharm el-Sheikh to St Petersburg were Russian tourists.

Russian plane crash: What we know

Dabiq – a propaganda magazine for IS – published the photo of what it described as an IED (improvised explosive device).

It provided no further details about the device.

An article in the magazine claimed militants had been able to bypass the security at Sharm el-Sheikh airport and smuggle the bomb onto the plane.

It said initially they had planned to target a country of the US-led coalition, but then decided to attack the Russian airliner because of the air strikes that Moscow launched in Syria on 30 September.

The magazine also posted a picture of what it said were passports of some of the victims of the crash.

Security experts told the BBC the “on-off” switch on the device could have been operated by someone on the plane, in effect meaning a suicide bomber was on board.

An alternative explanation is that the device could have had a pressure-sensor and been detonated when the plane reached a certain altitude.

Just hours after the crash, Sinai Province said in a statement that it had destroyed the plane because of Russian military involvement in Syria.

Moscow has offered a $50m (£33m) reward for information on the Sinai plane attackers.

Metrojet is the brand name of Kogalymavia, an airline based in western Siberia.

31 Oct – Sharm el-Sheikh, Egypt Plane crashes killing all 224 on board. Russia says a bomb caused the crash and an IS affiliate says it was responsible.