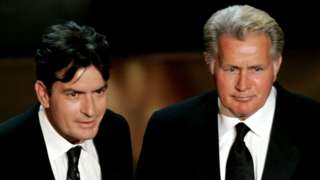 Martin Sheen has praised his actor son Charlie following the Platoon star’s confirmation he is living with HIV.

“I couldn’t believe the level of courage I was witnessing,” the West Wing star said at an event in Florida.

“I hope that this day is the first day of the rest of Charlie’s life as a free man,” the 75-year-old actor is quoted as saying by the Naples Daily News.

Charlie Sheen ended days of intense media speculation by confirming he is HIV positive in a NBC TV interview.

“I have to put a stop to this onslaught, this barrage of attacks and of sub-truths,” Sheen told Today show host Matt Lauer, adding he was diagnosed four years ago.

“It’s a hard three letters to absorb,” the 50-year-old went on, saying his “shame and anger” at the initial diagnosis led to “substance abuse and fathomless drinking”.

Now, though, he said he felt “the responsibility to better myself and help a lot of other people”.

“With what we’re doing today, others may come up and say, ‘Thanks Charlie, thanks for kicking the door open,'” he said in an interview broadcast on Tuesday.

“He had been leading up to this… for several months, and we kept encouraging him to do it,” Martin Sheen revealed at the Global Financial Leadership Conference on Tuesday night.

“He kept backing away and backing away because it was like going to his own execution, I guess. It was the most difficult thing he’d ever done.”

Sheen, who was appearing at a panel event with House of Cards actor Kevin Spacey, said he felt “a great sense of relief” his son had chosen to make his public admission.

“I left him a message, and I said that if I had that much courage, I would change the world.”

Sheen Sr played a fictional US president in The West Wing, a US TV drama that ran for seven seasons.