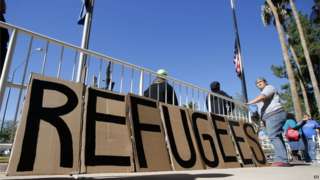 Police in Honduras have arrested five Syrians who were travelling on stolen Greek passports and intended to enter the United States by land.

The five men were detained on Tuesday night after arriving on a flight from neighbouring El Salvador, police said.

A spokesman for the Honduras’s special police force, Anibal Baca, said they had been tipped off by Greece about the men’s imminent arrival.

Greek diplomats in Honduras say none of the five speaks a word of Greek.

They were held at the international airport in the Honduran capital, Tegucigalpa.

According to Honduran police, they were planning to travel to the northern city of San Pedro Sula. From there, they intended to cross into Guatemala and then Mexico before reaching the US border, some 2,000km (1,2000 miles) away.

“The passports were stolen in Athens,” said Mr Baca, from the Police Investigations Division (DPI).

“Those are not their real names. We are still trying to establish their identities,” he told La Prensa newspaper.

Interpol will assist Honduran police with the investigation.

Republicans in the House of Representatives said they were drafting legislation to introduce tougher controls on Syrian and Iraqi refugees.