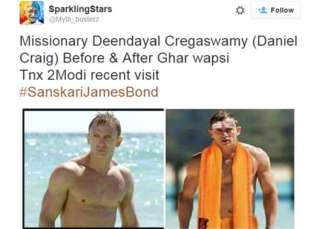 A James Bond who touches M’s feet to seek blessings before setting out for a mission? One who only shakes (not stirs) his buttermilk? You had better believe it.

Please meet the cleaned up, chaste, well behaved James Bond – trending in India as #SanskariJamesBond – an ironic hashtag prompted by a censor board decision to “cut short” Daniel Craig’s kissing scenes in the movie Spectre, which releases in India on Thursday.

That’s right. James Bond in his current avatar, simply kisses too much for the tastes of the Indian censor board, and so they have been reduced in length.

Ashoke Pandit, a member of the censor board confirmed that the kissing scenes had been cut, but insisted it was a decision taken in his “personal capacity” by India’s controversial censor board head Pahlaj Nihalani.

“Yes, this decision [to cut kissing scenes] was taken by Pahlaj Nihalani. He does these kind of things. Other shots have also been cut along with the kissing scene. This seems like a joke. If you do this to a James Bond film, then it’s shameful,” he told BBC Hindi.

Mr Nihalani was appointed to the post in January, days after the previous head of the board Leela Samson resigned amid controversy over clearance to the film Messenger of God, citing “interference and coercion”.

Mr Nihalani refused to comment on the James Bond film and his decision to cut short scenes.

An unabashed and self-declared fan of the prime minister, he was in the headlines most recently for making a video praising Mr Modi that the Hindustan Times newspaper charitably called a “cringe fest”.

Public display of affection is taboo in largely conservative India and kissing scenes are routinely blocked in films and television soaps.

Indians who have had to wait an extra three weeks to watch the latest Bond movie were predictably outraged, but soon decided to channel their outrage into more creative uses.

And thus #SanskariJamesBond was born.

The term “Sanskari” translates from the Hindi as “virtuous”. So Indian social media users took pains to make James Bond that way. They photoshopped Bond girls out of bikinis, tampered with intimate scenes and put actor Daniel Craig into traditional Indian wear.

The last laugh though is still on the Indian viewer as the cuts, for now at least, aren’t going anywhere.