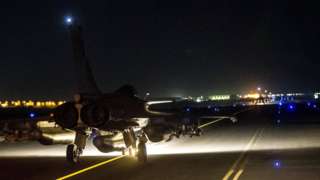 France has stepped up its air strikes targeting Islamic State (IS) in Syria since the deadly attacks in Paris on Friday, carrying out a series of raids on the jihadist group’s stronghold of Raqqa.

It is almost impossible to get any news out of Raqqa or even communicate with residents there.

IS has cracked down on activists and is controlling access to the internet.

The main group that is monitoring the situation in the city, which calls itself Raqqa Is Being Slaughtered Silently, has to operate with extreme caution.

Last month, one of its members, Ibrahim Abdul Qader, was killed along with his friend, Fares Hamadi, in the southern Turkish town of Urfa, near the border with Syria.

IS subsequently published a video showing one of the men with his throat cut, and warned: “You will not be safe from the knife of the Islamic State. Our hand will reach you wherever you are.”

I managed to speak to one member of the group via a secure application that it uses to spread news about events in Raqqa.

Ayman (not his real name) says the air strikes by France and other members of the US-led coalition against IS have intensified in the past three days, with about 15 a day targeting the group’s positions.

“There have been no civilian casualties, but unfortunately we can’t calculate the losses among IS members as they are not releasing any information,” he says.

Earlier, the UK-based Syrian Observatory for Human Rights reported that at least 33 IS militants had been killed since Sunday night. Most of them, it said, had been manning checkpoints in and around the city that were bombed.

But for Ayman, the coalition air strikes have not been very successful and he believes that more are needed to combat IS.

He also alleges that Russian and Syrian government air strikes on Raqqa have not been targeting the extremist group.

“All their attacks have been against civilians,” he says. “They have caused a lot of massacres.”

“The Russian bombing in western Raqqa – which they claimed was against IS – was far away from any IS locations,” he adds.

Russia has strongly denied causing civilians deaths, describing such reports as “information warfare” designed to discredit its operations in Syria.

Mustafa fled Raqqa last year, after he and his family were threatened by IS. They were later also forced out another town in northern Syria by Kurdish forces who are opposed to the jihadist group.

While he strongly condemns the attacks on Paris, Mustafa believes France and other members of the US-led coalition should be employing different tactics to combat IS.

“These air strikes are not working,” he says. “After one year of attacks against IS, they are expanding into new areas whether in Homs or Palmyra.”

Mustafa also criticises French President Francois Hollande’s plan for enlisting Russia, which launched an air campaign in Syria in September to prop up President Bashar al-Assad’s government, into a “grand coalition” alongside the US to combat IS.

In a speech on Monday, Mr Hollande reiterated that Mr Assad could not be part of any political solution to the conflict in Syria, but also said that “our enemy in Syria is Daesh”, using a term for IS based on an acronym of its former name in Arabic.

“I think the new French policy is not good,” Mustafa says. “President Francois Hollande said many times that the primary enemies were Bashar al-Assad and IS, and now he replaces his policy to stand alongside the Russians. And IS can launch new attacks in many countries in Europe.”

Mustafa doubts the US-led coalition’s reliance on air strikes can defeat IS and believes ground forces will need to be deployed. He is also worried about the coalition’s support for Kurdish forces, who have been accused of human rights violations.

“They must support the [rebel] Free Syrian Army to attack Raqqa and seize it from IS.”