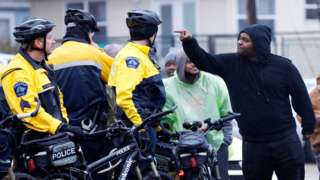 The Minneapolis police union has said that an unarmed black man was not handcuffed and was trying to disarm police when he was fatally shot.

Protesters have maintained that Jamar Clark, 24, was restrained by police when they shot him on Sunday.

Clark was placed on life support and died a day later.

The shooting has led to protests in the mid-western city, with police and demonstrators using irritant spray against each other on Wednesday night.

Police say that Clark was the suspect in an assault case and was interfering with medics who were working on the assault victim when he was shot.

Lt Bob Kroll, the head of the Police Officers Federation of Minneapolis told the Associated Press news agency: “Cuffs were never on.”

Since the shooting authorities have remained largely silent on the issue, with the Bureau of Criminal Apprehension – the agency investigating the shooting – saying that it was one line of investigation.

Mr Kroll also said that Clark had “a violent history” and that the two officers who were involved in the shooting have no disciplinary issues on their records.

A number of high-profile police shootings of black people have sparked protests nationwide in recent months about the police use of excessive force against African Americans.