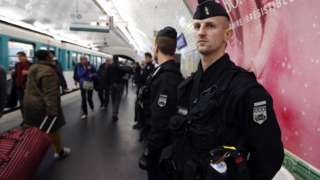 Europe ‘must wake up’ to terror threat

He spoke after it emerged that the suspected Belgian ringleader of the attacks had entered France undetected.

Belgian PM Charles Michel has defended Belgium’s security services amid claims the attacks were organised there.

It comes as EU interior ministers are due to hold emergency talks.

The meeting in Brussels is expected to tighten checks at the external borders of the EU’s passport-free Schengen area.

On Thursday, French prosecutors confirmed that Islamic State (IS) militant Abdelhamid Abaaoud was among those killed in a police raid the previous day.

His bullet-riddled body was found in the wreckage of a flat in the Paris suburb of Saint-Denis.

Investigators had identified him as the most likely organiser of last Friday’s attacks, but it was initially thought he was in Syria.

At a news conference, Mr Cazeneuve said “no information” had been received from other European countries about his arrival on the continent.

But he said he had received intelligence that Abaaoud had passed through Greece on his return from Syria.

“It is urgent that Europe wakes up, organises itself and defends itself against the terrorist threat,” Mr Cazeneuve told reporters.

French Prime Minister Manuel Valls said some of those involved in the attacks had taken advantage of the migration crisis in Europe – which has seen thousands of asylum seekers arrive on the continent – to “slip into” France unnoticed.

One of the attackers, who blew himself up outside the Stade de France, has been traced by his fingerprints to Greece where he was registered as a migrant.

2013: Said to have first visited Syria, joining the Islamic State group before slipping back to his home country, Belgium

20 January 2014: Passes through Germany’s Cologne-Bonn airport, en route to the Turkish city of Istanbul. Returns to Syria, where he becomes one of the faces of IS propaganda

15 January 2015: His mobile phone is reportedly traced to Greece from calls made to an Islamist cell in Verviers, Belgium

16 November 2015: Three days after the Paris attacks, a foreign intelligence service alerts France that he is back in Europe, having passed through Greece; police receive a tip-off that he is on French territory

18 November 2015: Killed in police raid on Paris suburb of Saint-Denis, five days after reportedly heading the attacks in Paris that left 129 people dead

How the Saint-Denis raid unfolded

A draft resolution for Friday’s EU meeting says ministers will agree to implement “necessary systematic and co-ordinated checks at external borders, including on individuals enjoying the right of free movement”.

Correspondents say Belgium has found itself under pressure after the attacks. French President Francois Hollande said they were “planned in Syria, prepared and organised in Belgium”.

A former senior French intelligence official has also been quoted in French media as saying that “the Belgians just aren’t up to it”.

In an address to parliament on Thursday, Belgian Prime Minister Charles Michel said it was intelligence from his country’s security services that had led to the huge raid in Saint-Denis.

“I do not accept the criticisms which were aimed at denigrating the work of our security services,” he said.

Abaaoud grew up in the Molenbeek district of Brussels which has been described as a hotbed of extremism.

Suicide bomber Brahim Abdesalam, who attacked a cafe in Paris, and his brother Salah, who is on the run following the attacks, are also from Molenbeek.

On Thursday, the French Parliament extended a state of emergency for a further three months from 26 November.

Eight people were arrested following the raid in Saint-Denis. A woman at the flat – reported in French media to be Abaaoud’s cousin – died after detonating a suicide vest.

‘No timetable’ for Syria strikes vote