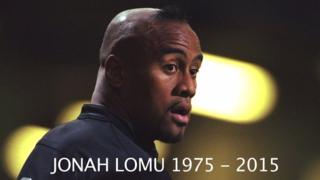 Jonah Lomu’s family say they have been “truly touched” by tributes to the New Zealand great after his death aged 40.

Lomu died on Wednesday at home in Auckland. He had been diagnosed with a rare kidney condition in 1995.

“We wish to thank all who have expressed their sympathies for our family at this incredibly difficult time,” said Lomu’s father-in-law Mervyn Quirk in a statement.

“We know that many people are mourning a very special individual.”

Quirk said funeral arrangements for Lomu were yet to be finalised.

However, he added there would be a celebration of his achievements “during an all too short time on this earth”.

“We are truly touched by the outpouring of love for Jonah and the support for our family,” he added.

Meanwhile, Lomu’s widow, Nadene, has taken down a fundraising page set up after his death.

Ms Lomu had said the page, on the Givealittle site, would help her and her sons bring Lomu’s “dreams and visions to life”. She later clarified the money would go towards her sons and their education.

Family spokesman and former All Blacks coach John Hart said the page had felt at the time like “an appropriate way” to respond to requests from the public who wanted to help the family, but that it had been “misunderstood”.

He said Ms Lomu had asked for it to be taken down.