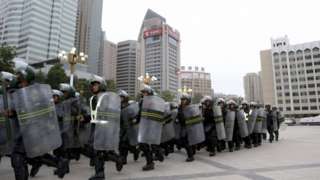 Chinese security forces have killed 28 people allegedly responsible for a deadly attack on a coal mine in Xinjiang, state media has said.

The deaths took place over a 56-day operation in which one person was detained, Xinjiang government’s web portal Tianshan reported.

It is the first official report of the 18 September incident at the Sogan colliery in Asku that killed 16 people.

Xinjiang, often hit by unrest, is home to a Uighur ethnic minority.

China says “foreign terrorists” are behind the violence in the region. Hundreds of people have died in attacks over the past three years.

Ethnic Uighurs, who are mostly Muslim, say Beijing’s repression of their religious and cultural customs is provoking the violence.

“After 56 days of continuous fighting, Xinjiang destroyed a violent terrorist gang directly under the command of a foreign extremist group. Aside from one person who surrendered, 28 thugs were completely annihilated,” the Xinjiang Daily said, according to Reuters news agency.

US government-funded Radio Free Asia (RFA) was the first to report the mine attack in September. It said at least 50 people were killed.

Earlier this week, RFA said 17 suspects from three families, including women and children, had been killed in the police operation in response to the mine attack.

China strictly controls media access to Xinjiang so reports are difficult to verify.

Who are the Uighurs?