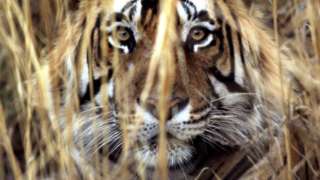 Forest workers say a tiger who killed and ate a farmer a few days ago has been shot dead after attacking a forest guard in southern India.

The tiger was killed when it caught hold of the guard who was tying a buffalo calf as a bait to a tree in the Bandipur forest range, officials said.

The animal, described as a “man-eater” by authorities, had attacked another man about a month ago, they said.

There are about 1,700 tigers left in the wild in India.

It is estimated India had 100,000 tigers a century ago, but their numbers have declined sharply since then, due to poaching and rapidly shrinking habitats.

With increasing human encroachment into their reserves, tigers often compete for resources with nearby villagers, leading to conflict.

The latest incident took place on Wednesday when more than 60 forest department personnel along with their colleagues from the Special Tiger Protection Force were sent to capture the tiger.

As tigers tend to return to the same spot, the team tied a goat as a bait at the place where the animal had killed and partially eaten a 55-year-old farmer, forest officials said.

The tiger evaded the bait but left behind enough pug marks for the forest department officials, armed with tranquilisers and bullets, to remain on the track.

The tiger was killed in a rather dramatic manner when it pounced and caught forest guard Shiv Kumar.

“It was when Shiv Kumar was trying to tie the bait that we suddenly heard the tiger’s growl and the guard’s shriek. That’s when our sharpshooter Sushil Kumar shot the animal,” Ravi Ralph, chief wildlife warden of Karnataka, told BBC Hindi.

Mr Kumar was taken to a hospital where his condition is described as “out of danger”.

Last year, in the Doddabetta Forest range near the town of Ooty in Tamil Nadu, forest workers shot dead a tiger blamed for killing three women over two weeks.

Wildlife experts say most attacks on people are chance encounters gone wrong, and victims of such attacks are rarely dragged away as prey.

But a series of attacks on people in quick succession is a tell-tale sign of a man-eater at work.

Fewer than 85 humans are killed or injured by tigers every year in India and the country’s strong animal welfare lobby has been campaigning that “man-eaters” should be captured rather than shot.