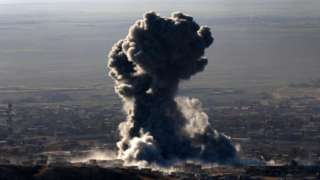 A US air strike aimed at an IS checkpoint is likely to have killed four civilians, possibly including a child, the US military has said.

On Friday the military released the findings of an investigation into the incident, which took place in March.

Investigators concluded the checkpoint was a valid target and the attack did not violate international laws.

The US has rarely acknowledged civilian deaths in the fight against IS and the announcement brings the total to six.

“All reasonable measures were taken to avoid unintended deaths of, or injuries to, non-combatants,” US Central Command spokesman Patrick Ryder said.

Col Ryder told reporters that the four civilians emerged from vehicles parked near the checkpoint, near the northern town of al-Hatra, after the A-10 jet released its weapons.

He said the plane’s crew was not aware of their presence at the time the strikes were authorised.

An unknown woman notified the US military of the incident and claimed two women and three children were killed.

The military said it could not determine the age and gender of the victims without further forensic investigation or other information that was not available to the coalition.

It acknowledged the analysis indicated one of the people was much smaller than the rest and may have been a child.

A US Central Command statement expressed regret for what it called the unintentional loss of civilian lives.

The US has rarely acknowledged civilian casualties linked to US air strikes in Iraq and Syria.

In May, it concluded two children had been killed in a November 2014 air strike in Syria. It is investigating several other reports of civilian deaths.