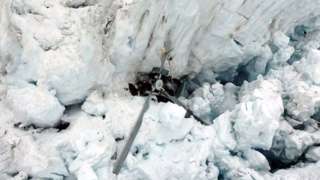 Four British and two Australian tourists are believed to be among seven people killed in a helicopter crash in New Zealand, New Zealand police say.

The aircraft came down and landed in a crevasse on the Fox Glacier, on the country’s South Island, on Saturday morning at about 11:00 local time.

The glacier on the remote west coast of South Island is popular with tourists.

The helicopter that crashed is believed to be a Eurocopter “Squirrel” operated by local firm Alpine Adventures.

The recovery operation has been hampered by bad weather, but is expected to resume on Sunday, New Zealand Police says.

Inspector John Canning said: “Police received a phone call this morning to say that there was a helicopter missing at the top of the Fox glacier, subsequently we’ve had rescue helicopter up there and discovered the wreckage of an aircraft up there.

“The aircraft was carrying the pilot and six passengers. There is no sign of life up at the scene, and tomorrow when the weather improves we’ll be going back into the scene to recover the bodies of the passengers and the pilot. “

Formal identification of those killed would take some time, a spokesperson added.

“Police have been liaising with the embassies of the countries concerned to ensure the next of kin are advised of the situation,” they said.

The cause of the crash is being investigated.

The Rescue Co-ordination Centre New Zealand said it sent four rescue helicopters to the scene, including one with a cliff rescue team on board.

A spokesperson for the UK’s Foreign and Commonwealth Office said: “We are urgently investigating reports that British nationals were involved in a helicopter crash in New Zealand.”

Are you in the area? Do you have any information on this story? Email [email protected].

If you are willing to speak further to a BBC journalist, please include a contact telephone number.