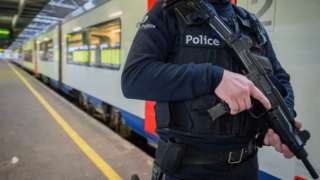 Belgium’s police forces are looking for several terror suspects, as the capital, Brussels, endures a second day of a security lockdown.

Interior Minister Jan Jambon said the current threat was greater than that posed by Salah Abdeslam, wanted for the Paris attacks.

Brussels is on its highest level of alert amid fears an attack.

The city was a base for the Paris attackers – Islamic State militants – who killed 130 people.

The security situation in Brussels is being reviewed and an announcement about whether the lockdown should continue is expected at 1700 local (1600 GMT).

Abdeslam: Suspect ‘meant to blow himself up’

Metro services remain suspended, and residents have been told to avoid crowds.

Soldiers are patrolling the streets as a manhunt continued for Salah Abdeslam, 26, a French national who lived in Brussels. Police describe him as armed and dangerous.

Friends said he was in the Brussels area and trying to get to Syria.

Interior Minister Jambon said the “terror threat in Belgium would not be over once Salah Abdeslam is out of harm’s way”.

“The threat is broader than the one suspected terrorist,” he told Flemish broadcaster VRT.

It was not clear if Mr Jambon he was referring to those involved in the Paris attacks, or others who might be planning attacks in Belgium.

Life in the city is expected to be unusually quiet again during the day. The city centre was almost empty on Saturday night as restaurants and bars shut early.

The US embassy told Americans in the country to stay indoors and the US European Command issued a 72-hour restriction on travel to the city by all military personnel and contractors.

At the scene – BBC’s James Reynolds in Brussels

“Visit Brussels,” encourages a sign in Place Flagey. But there are very few people around to read it.

Normally, the square would be full of stalls for the Sunday market. But the alert has forced the market to shut. Today, the square is largely empty – disturbed only by occasional joggers cutting through to the park.

Next to the square, a handful of people waited for the number 71 tram.

“I’m not scared,” said Michel, a retired civil servant, “If the country could survive the 1940s, we can surely get through this.”

In the centre of town, the police continue to check any leads they come across. In the early morning I watched two police cars with sirens speed towards a roundabout. They had to reverse when it turned out they’d taken a wrong turn. They eventually made it to check out a building site. They didn’t appear to find anything suspicious.

Brussels terror threat: ‘Everyone is on edge’

Read more on the Paris attacks

The Belgian authorities have so far charged three people with involvement in the Paris attacks, claimed by Islamic State militants.

French media have reported that nine militants carried out the attacks, and seven died on Friday night.

One of the men who drove Salah Abdeslam to Belgium told his lawyer that he was dressed in a “big jacket” and may have had a suicide belt.

The lawyer, Carine Couquelet, told French TV this raised questions, including the possibility that Salah Abdeslam may have been supposed to blow himself up in Paris but had had second thoughts.

Friends of Abdeslam told ABC News they had spoken to him on Skype and said he was hiding in Brussels and desperately trying to get to Syria.

They said he was caught between European authorities hunting him and IS members who were “watching him” and were unhappy that he had not detonated his suicide belt.

Meanwhile on Saturday, members of the US rock band Eagles of Death Metal described the horror of the Bataclan concert hall massacre in their first interview since the attack.

Lead singer Jesse Hughes said a group of fans who hid in the band’s dressing room were found by the gunmen and killed except for one who hid under Hughes’s leather jacket.

In a clip from the interview with Vice News to be released in full next week, an emotional Hughes said: “A great reason why so many were killed was because so many people wouldn’t leave their friends. So many people put themselves in front of people.”

Are you in Brussels? How have you been affected by the raised terror alert level in the capital? Email your experiences to [email protected].

Please include a contact number if you are willing to speak to a BBC journalist today. You can also contact us in the following ways: