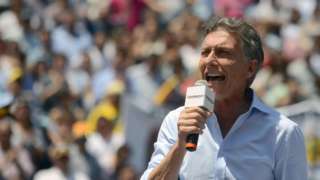 If the result is confirmed, it will be the first time in more than a decade that Argentina’s centre-right opposition has wrested the presidency from the centre-left Peronists.

A spokesman for Mr Scioli said they would wait for official figures to come in before commenting.

Neither candidate managed to win the first round of voting in October outright, forcing a run-off – the first in the country’s history.

Mr Scioli was marginally ahead in the first round, with 36.7% to 34.5%, but has lost ground to his rival in the month since.

Mr Macri, the leader of the Cambiemos (Let’s Change) coalition, went into Sunday’s vote with a comfortable lead in opinion polls.

He campaigned on pledges to bring new investment into the ailing economy, tackle crime and fight corruption.

The son of one of Argentina’s richest men, he had a long career in business before entering politics.

A close ally of current President Cristina Fernandez de Kirchner, Mr Scioli had been expected to win by a greater margin in October.