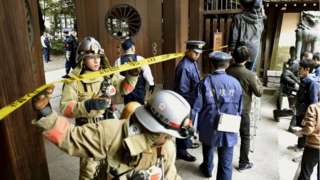 The public toilets at Tokyo’s controversial Yasukuni shrine have been hit by a small explosion.

No injuries have been reported but the ceiling, floor and wall of the toilet were damaged, local media reported.

The cause of the explosion has yet to be determined.

Tokyo’s metropolitan police said batteries and wires were found at the scene, and suspect the blast may have been a deliberate attempt to attack the shrine.

Along with dozens of fire fighters and police officers, the metropolitan police’s bomb squad was also called to the scene, to deal with suspicious unexploded objects.

The blast left a hole about 30cm wide in the ceiling, of the toilet block, according to Japan’s public broadcaster NHK.

The shrine, part of the Shinto religion, was busier than usual on Monday morning with the start of the annual Festival of First Fruits. It was also a public holiday in Japan.

The shrine has reportedly cancelled visits to the festival by children, for safety reasons.

Yasukuni shrine is dedicated to Japan’s war dead, including 14 Second World War “Class A” war criminals. The souls of the dead are worshipped there rather than just remembered.

The shrine – and frequent visits to it by politicians, including the current Prime Minister Shinzo Abe – is a particular source of friction between Japan and its former Second World War enemies China and the two Koreas.

Are you near the Yasukuni shrine? Have you been affected by the explosion? Let us know about your experiences. Email [email protected] with your stories.