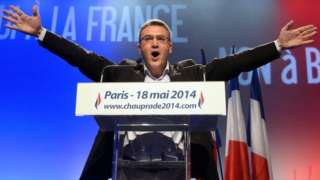 One of the three, Aymeric Chauprade, is an independent right-wing member of the European parliament.

The pilots were arrested in 2013 preparing to take off in a plane carrying 26 suitcases of cocaine.

They were sentenced to 20 years but during the appeal process fled to the French Antilles and then on to France.

The pilots were convicted in Santo Domingo in August in the so-called “Air Cocaine” drug-trafficking case.

They had been arrested in March 2013 at the resort of Punta Cana on a privately hired jet carrying 680kg (1,500lb) of cocaine.

After their conviction they were freed under the judicial review process and barred from leaving the country.

But they reportedly escaped by boat to the French Antilles and from there by plane to France.

French media earlier said the pilots had worked previously for the French navy and had been helped by former intelligence agents.

The French government said it had nothing to do with their escape.

The pilots say they are innocent and have vowed to clear their name.

They were arrested earlier this month in Lyon but legal experts say an extradition is unlikely.