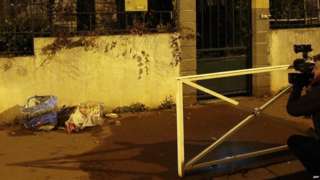 French police are examining what appears to be a suicide bomb belt dumped on a Paris street following attacks that killed 130 people.

It is said to resemble belts used by the attackers and was found in a suburb which a suspect is thought to have passed through after the attacks.

The US has issued a worldwide travel alert in response to the attacks.

The Belgian capital Brussels remains on high alert. Schools and the metro will stay closed on Tuesday.

They are due to reopen on Wednesday but the highest alert level will continue for at least another week.

Authorities fear attacks like those in Paris on 13 November may be carried out in Brussels, where at least one Paris attacker lived. Prime Minister Charles Michel warned that the threat remained “imminent”.

French President Francois Hollande is due to meet US President Barack Obama on Tuesday as he continues a busy week of international diplomacy during which he will meet all other permanent members of the UN Security Council.

How the Paris attacks are affecting Muslim children

Interview transcript: ‘My brothers were manipulated, not radicalised’

Paris attacks: Who were the victims?

Who were the attackers?

The suspected explosives belt was found in a dustbin on Monday by street cleaners in the Montrouge district, police say.

Police sources told news agencies it resembled those used in the 13 November attacks. According to AFP news agency, the device lacks a detonator.

It is one of two key pieces of evidence discovered by French police and publicly linked to Salah Abdeslam, one of the main suspects.

His brother Brahim blew himself up during the attacks.

A mobile phone was previously found in an abandoned car he rented. Phone data suggest that on the night of the attacks, Salah Abdeslam was in the area where the belt was later found.

It may be that he planned to detonate the bomb belt but abandoned the plan – either because the belt was malfunctioning or, as his brother Mohamed has suggested, because he had a last-minute change of heart.

A massive manhunt for Salah Abdeslam is continuing in both France and Belgium.

Brussels on Monday saw a third day of unprecedented restrictions, with troops and armed police patrolling the streets.

Announcing that the state of alert would remain at level four, Mr Michel stressed “we must all progressively get back to a normal life”.

Many citizens are keen to do this, reports the BBC’s Chris Morris in Brussels, but he says others will be wondering, with the main suspect still at large, what if anything has changed.

The rest of Belgium remains on alert level three, meaning an attack is seen as possible and credible.

How is Brussels affected by terror threat?

Belgian police have charged a fourth suspect with terrorism offences related to the Paris attacks, the federal prosecutor said.

The unnamed man was one of 21 people detained in raids on Sunday and Monday. Seventeen have been released without charge.

Mohammed Amri, 27, and Hamza Attou, 20, have already been charged with aiding Salah Abdeslam. A third, unnamed suspect has also been charged.

On Monday, France carried out its first air strikes against IS in Syria and Iraq from its Charles de Gaulle aircraft carrier, newly deployed in the eastern Mediterranean.

Tuesday: Flies to Washington to meet US President Barack Obama

A US worldwide travel alert is unusual but not rare.

Similar advice, which applies everywhere bar the US itself, was issued twice in 2011 – following the death of Osama Bin Laden and on the 10th anniversary of the 11 September attacks. There was a further warning in August 2013.

The most recent worldwide alert came last Christmas in response to an attack in Sydney, Australia, flagging the risk of “lone wolf” attacks, a warning repeated this time using the less colourful phrase “unaffiliated persons”.

Such broad warnings have been criticised in the past, both for being so vague as to be of little practical use and for doing the terrorists’ job for them by creating a climate of fear in which governments may introduce repressive policies.

But with millions of Americans travelling this week to celebrate Thursday’s Thanksgiving holiday, US officials insist the action is a sensible reminder of the global terrorist threat.